Home / About us / AEE History
â€¹Return to Previous Page

The Spanish Economic Association was born in 1996 after a gestation period of just over a year. Since its inception it was the beneficiary of a capital stock that came from afar: the Revista Española de Economía (REE), which would later become the Spanish Economic Review (SER), and the Simposio de Análisis Económico, which it soon took over. 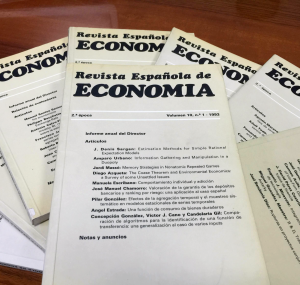 The Revista Española de Economía was born in 1971, and in its first season it provided some degree of modernity and published a few original papers of merit but it continued to share some common characteristics of the times. There was no peer review, and numerous pages were devoted to translations into Spanish. It eventually its publication ended, until in 1984 a second, very different stage started. In 1986 I was entrusted with running the journal by the Instituto de Estudios Fiscales. I did it until 1999, when it had already been transformed into the Spanish Economic Review. This stage began with the aim of guiding economic research in Spain in new directions along two lines. The first was to introduce anonymous peer evaluation for the first time in Spain in the field of Economics. The second was to abandon translation and stimulate the production of original work.

Over the years, the flourishing of research in Spain, the increasing ability of our researchers to publish in foreign journals, and the dwindling interest by the public sector in holding a journal that was far removed from the interests of public servants, led those in charge to follow a new path, aimed at creating a journal of a fully international nature, supported by an association that was meant to gather the growing number of economists who shared its goals. The meeting of the Editorial Board in 1995 outlined the strategy: to start negotiations with foreign publishers and to create an association that would pick up the baton, would own the new journal and would that members would benefit from appropriate subscription fees.

That is how the members of the REE Editorial Board decided to create the SEA, under the presidency of Andreu Mas Colell, to buy the Revista Española de Economía trademark, whose rights had expired, and to publish the last issues of the REE, as the arrival of the SER was prepared, a journal which came out two years later, in 1998, and whose editorship I entrusted to Juanjo Dolado in 1999.

Very soon the idea that the Spanish Economic Association organized its own annual meeting was discussed, and luckily it was not necessary to start from scratch, but rather the opposite. Since 1976, the Department of Economic Theory at the Universitat Autònoma de Barcelona had been organizing the Simposio de Análisis Económico. This meeting was held as an open forum and a must for those who were joining the new form of research in Economics. The Simposio had acquired such a large scope that was only natural that, after twenty five years, it was taken over by the new Association, and that the venue started rotating among research centers.

Another important activity of the Spanish Economic Association, linked to the Simposio since 1998, is the New Job Market for PhDs. The Job Market was born in order to support and promote the hiring of PhD economists by both domestic and foreign institutions. The umbrella of the Simposio allows this labor market to function more efficiently and to have greater visibility and impact.